This week we picked up a swarm of honey bees that had decided to settle a bird box. The bees being in the bird box made collecting them a much easier job all we had to do was cover the whole of the bird box with a sheet, zip tie the sheet closed around the bird box’s post and head back to Knoxwood. 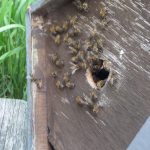 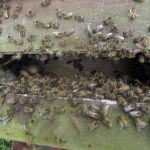 Ok maybe there’s more than that 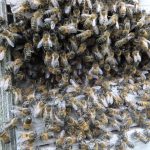 Once the bees where secure we brought the back to Knoxwood bird box included. When they where back at the sanctuary we had the job of getting them out of the bird box and into the empty hive. Although there are thousand s of bees in a swarm you only really need to worry about getting the queen in to the hive and the rest should follow her. 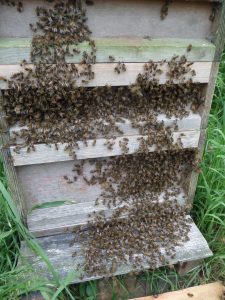 At one point when we thought we had all the bees heading in to the hive the queen decided to give us a fright by turning around and marching everybody back out of the hive, having a little fly around inspected the hive and then marched everybody back in again and settled down. The bees have now been in the hive for a week and seem to be working away quite happily.